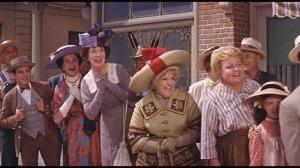 First Voice:
I got a second mortgage without asking.

Third Voice:
Apparently I have another checkbook.

Fourth Voice:
An ATM card and a mystery line of credit too.

People:
O-ho the Wells Fargo Wagon is a-comin’ now
Is it a prepaid surprise or C.O.D.

For those unfamiliar with the Broadway show and movie “The Music Man,” I should note that ironically the last line of that song as it appears here is the actual lyric.

I’ve been waiting to write this post to see if there can be any possible redeeming aspect to this story but I can’t find one.

To recap, Wells Fargo is accused of having opened some two million bogus accounts for its unsuspecting customers. Some customers incurred fees and late charges they didn’t even know about – when these phantom fees went unpaid, Wells Fargo sent them to a collection agency, jeopardizing the customers’ credit scores.

The Consumer Financial Protection Bureau and the state of California reached a settlement with Wells Fargo of $185 million in fines. For its part, Wells, while admitting no wrongdoing, announced that it has fired some 5300 employees over the past five years.

There is so much madness going on here I hardly know where to begin. But for starters, the firing of thousands of employees allegedly involved in the scam over a five-year period suggests that Wells Fargo knew for those five years (and probably much longer) that these unlawful activities were going on and took no effective action to put a stop to them.

In and unto itself, that revelation is disturbing to say the least. One has to wonder just what ethical lapse or illegal behavior would cause the Wells Fargo brass to say, “Enough!” and pull the plug. Evidently, they haven’t crossed that line yet.

But it’s important to look not just at the effect but also at the cause of the bank’s troublesome behavior. Recent news coverage has revealed that the employees in the Community Banking division were under intense pressure to meet cross-selling quotas. We have all experienced a pushy customer service rep who, after attending to our inquiry, attempts to push additional services on us. But that’s just obnoxious and annoying. Taking money out of my legitimate account to open another one without my knowledge – well, that’s going beyond a mere ethical lapse. It is indicative of a workplace environment governed by intimidation and fear – fear of not meeting outrageous sales targets and likely a fear for one’s job. But Wells Fargo executives deny there is anything wrong with their company’s culture. (By the way, if you turn the situation around — let’s say, you walk into a branch and pass the teller a note asking for all the money in her drawer — I have a pretty good idea how Wells would react and where you would have breakfast the next morning.)

What causes a company not just to condone such behavior from its employees but to demand it? Like the butterfly flapping its wings ultimately causing a typhoon, the root causes of bad behavior can be very subtle. Perhaps the CEO mentions to the executive committee that he’s under pressure to gin up another two cents per share of earnings to meet analyst expectations. He’s the butterfly. Ten layers beneath him, it starts to rain.

We’ve seen similar examples in the past. In some cases, it involved “trade loading” or “channel stuffing.” A notable case involved Sunbeam-Oster, whose despicable leader Al “Chainsaw” Dunlap (not so named for his enlightened treatment of employees) pressured his management team to improve earnings fast. That led to shipping unordered barbecue grills to retail establishments like big box stores, recording the shipments as sales and creating imaginary earnings just in time for the quarterly report. Once the stellar results were announced, the company would finally really sell the grills to the retailers at an enormous discount – and the cycle would begin again until the bottom fell out. Eventually, Sunbeam fired the disgraced Dunlap and settled a massive shareholder lawsuit. RJR Nabisco and Bausch & Lomb had similar episodes.

What makes the Wells Fargo situation stand out is the length of time the scam was operating and the company’s unwillingness to deal with it. They were not just privy to it, they were addicted to it. Carrie Tolstedt, the CEO of the Community Banking division, was either fully aware of these practices or utterly incompetent. Either way, she was handsomely rewarded for the bogus earnings, collecting $9 million in salary and bonus last year. And Wells Fargo CEO John Stumpf and his whole executive team made out as well or better.

Here’s the question: were the 5300 employees who were terminated over that five-year period axed because they were engaged in unethical or unlawful activity? Or were they fired because they failed to meet the relentless sales targets set by somebody who needed to satisfy his or her boss, so that he or she could please his or her boss…all the way up to the C-Suite? I’m betting it was the latter.

Anyway, now that the scandal has been revealed, we should expect to see some accountability brought to bear. Perhaps the defenestration of Ms. Toldstedt at the very least? Hardly. The 56-year-old Ms. Tolstedt has announced that she is retiring, and taking a $124 million retirement package with her.

And let that be a lesson to her.