Forty-eight years ago, “60 Minutes” debuted on CBS. And 12 years later, I started my career in PR, already wondering why corporate executives ever volunteered to be on the program. That wonderment persists to this day.

During my career both in the agency and corporate spheres, there were quite a few times when a “60 Minutes” producer cast a dark shadow on my door or the door of a client.

I always gave the same advice. Do not do it. Don’t succumb to the arrogance that your story is so compelling and your spokesperson so smooth that you can turn the whole situation around.

“If we can just explain the science…”

“Once they understand our data…”

“We have the facts on our side…”

I’ve heard ‘em all. No doubt, one or more of these delusional statements was heard in a conference room at Halyard Health before its COO decided he could handle whatever Anderson Cooper threw at him. 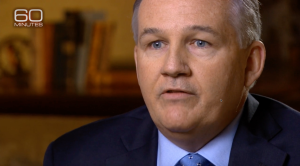 Halyard Health makes, among other things, surgical gowns that are used by hospitals around the world. During the recent Ebola crisis, these gowns were part of the defensive measures medical professionals used to try to prevent being infected by a patient’s bodily fluids. The only problem: they leaked. Sometimes the sleeves fell off during an operation.

The folks at “60 Minutes” don’t go on fishing expeditions. Before they make first contact with a company, they already have a pretty good idea of what story they want to tell. In fact, more often than not, they have already written the first draft and are looking for you to provide evidence that your company is as bad as they think.

It reminds me of the classic line in the movie “Grosse Point Blank” when hitman Martin Blank says, “If I show up at your door, chances are you did something to bring me there.” 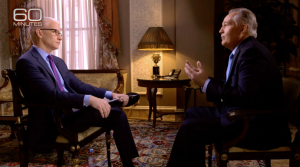 So, as the company’s PR and legal teams start prepping the spokesperson with every dirty, rotten question they can think of and devising bulletproof answers, they have already lost the war. Because every assertion the company spokesperson makes (that is, every one of his or her assertions that make it into the story, and that’s up to the producers) will already have been eloquently refuted by someone like these two guys before “60 Minutes” comes to see you.

The fellow on the left is a former employee, who describes how he repeatedly warned management of the miserable failure rate of the gowns and management’s uncaring response. The guy on the right is a lawyer retained by hospitals that are suing Halyard. Told that the Halyard COO denied there was any kind of problem, he replied, “They forgot the eleventh commandment. Never lie to ’60 Minutes.’” And really, how could “60 Minutes” not run that?

Finally, after the COO is charbroiled on both sides, Anderson Cooper hands him a page from a Halyard Health internal presentation that shows that the company knew that their gowns were deficient, and did nothing about it. The COO says, “Anderson, uh…if it’s okay, I’ve not seen this presentation to my recollection so I don’t think it’s appropriate, particularly out of any context, to react to it.” And then he goes on to say, “I think, uh, Anderson, from a, uh, time perspective, if you don’t mind…”

Anderson Cooper: “You wanna stop?” (No problem, he’s already gotten what he came for.)

COO: “We’ve, uh, spent, uh, the time we agreed to.” At which point he turns around in his chair and begs his team to rescue him.

But it was too late.

They forgot the twelfth commandment: “Never go on ’60 Minutes.’”

Instead of appearing on camera, you can send “60 Minutes” a written response. The producers will highlight certain passages and then have their other sources rebut them. It won’t be pretty, but you’ll spare yourself or your CEO a visual like that last one, which I will remember long after the details of the story recede in my memory.