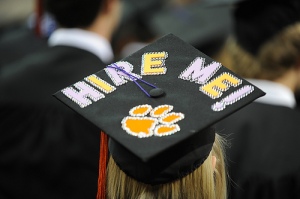 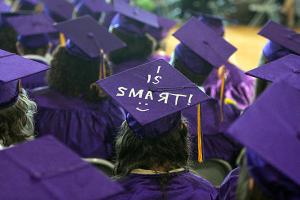 Oddly enough, I was overlooked once again to serve as a commencement speaker this year. In fact, although I have been available most Spring weekends for the past few years, not one institution of higher learning (or lower, for that matter) has called upon me to make a few remarks to send off the graduating class into the future.

Nonetheless, I have not been deterred from assembling a few thoughts for a commencement speech just in case. But with this year’s graduations mostly behind us, I may as well just lay them out here. Feel free to pass them along to any newly minted graduates in your acquaintance.

1. Go online and order some tasteful note cards or stationery. If you spend more than $30 you are over-investing. As you embark on that most tedious of journeys — the job search — remember that first impressions (while important) are not the only impressions you want to leave with a potential employer. After your interview, be sure to ask for a business card and then immediately — before you forget — hand-write a thank you note. Be sure to call out something memorable from the conversation — it makes them think you were paying attention.

If you think hand-written notes are so much harder than sending an email, you are right. And that’s the point. The fact that you have made the effort to send a hand-written note shows that you are courteous and willing to go the extra distance. And I can assure you, a hand-written note in the person’s inbox is the first thing that gets opened. (At least it is in my office.)

2. The economy is improving, but it is still taking a long time for managers to pull the hiring trigger. It is easy to forget the details of an applicant one met six weeks ago. Make it easy to remember you: Look for articles that are germane to the conversation you had and send one along by email every two weeks or so. Not more often than that, but not less, either. Show the manager that you really want that job, but don’t be a pest!

3. Keep a spreadsheet of everyone you have met in your job search, and send them notes (email will do) when you finally land a position to let them know and to thank them for their time and assistance. That will tell them two things: you thought enough of them to make the effort and that you turned out to be employable after all. Those contacts may come in handy when you decide to move on to something new in a year or two.

4. If you don’t get a particular job, refrain from disparaging the employer and/or his or her ancestors, human or otherwise, on Facebook and Twitter.

1. Once you are fortunate enough to be offered a position, your next step is to validate early and often why you were the right choice. This is no time for your ego to come to work with you — there is no task that is beneath you. Work hard and fast. Never take “no” for an answer once your boss has given you an assignment. There is always a way to get it done; you just need to figure it out. Click through here http://bit.ly/11AkAuz  to read about The Doctrine of Completed Staff Work. Originally published in the Army Navy Journal of 1942, it still resonates today. Make it your personal set of operating principles.

2. Be nice to everybody. You never know who will be your next boss, or your client. And you would not want to have someone working for you someday who thinks (and reports widely) that you are a loathsome piece of…well, you get the idea. Always act in a manner that will cause anyone to remember you as a genuinely nice and talented person. It may get you your next job and frankly, it makes your current one a lot less tiring.

3. Share credit. But stand up and take the blame when it’s due. Failure to do either will be noticed and remembered. Forever.

4. Learn as much as you can about your job as fast as you can. When you find yourself doing fewer new things, it’s time to move on.

Growing Into a Great Manager

1. Learn by example. What are the behaviors some bosses and co-workers exhibit that create dissention, fear and ill will in the workplace? Don’t do any of those.

2. What have your bosses and co-workers done to make you feel really good about your achievements and impact? Do a lot of that.

3. Keep on being nice to everybody.

Mind you, I didn’t follow (or even know) any of this advice when I started out, as people who knew me then would attest. That only goes to show that you can learn and you can grow.